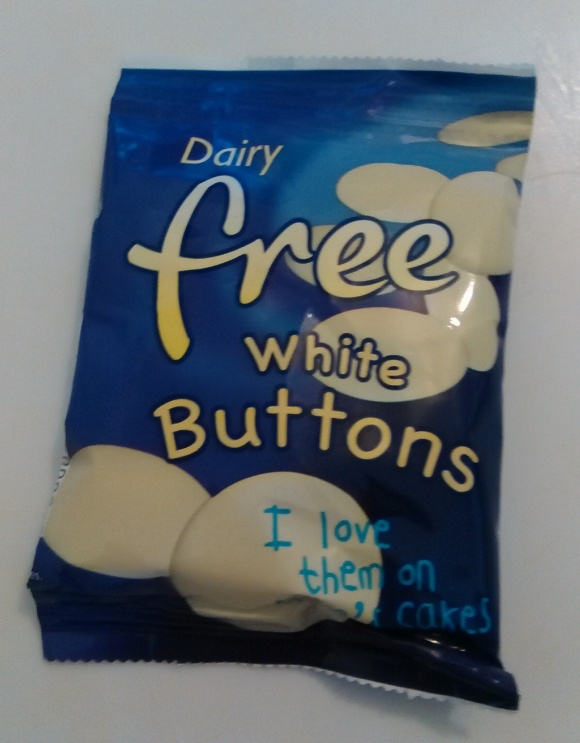 Made by Sweet William in Australia and packaged in the UK (the no-nonsense package told me) these little buttons promise all the joy of white choccy buttons without the dairy, gluten, malt or dead stuff. Well that sold them to me, but what are they like? 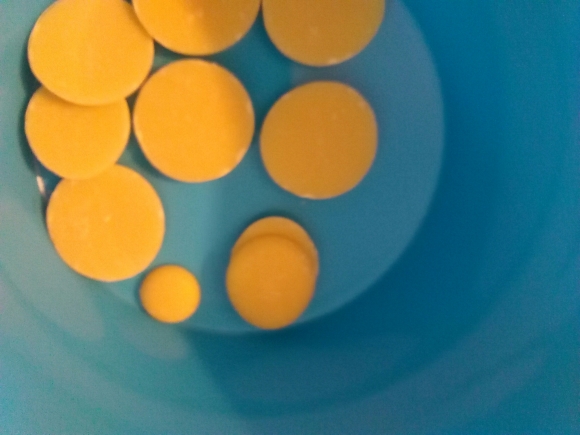 Well they certainly look like choccy buttons don’t they? I’m loving the baby one which I’m sure isn’t in every pack but when a Mummy button loves a Daddy button who are we to get in the way?

To the touch they are cool and smooth and feel almost like a plasticcy rubber, my hopes shrivelled.

In the mouth its just the same.

I do not think you would mistake these for dairy. But, they are sweet, really sweet and after the initial few seconds do sort of melt into a slightly sickly fix of sweet, sludgy goodness. They remind me of my pre-dairy-intolerant experiences with Jazzies, the hundred-and-thousands covered buttons traditionally found at funfairs. Or perhaps cheap white mice. We’re in candy territory here make no mistake.

Our picky eater toddler at this point pounced on the package determined to have her say. Stuffed enthusiastically in her mouth and crunched, half a button soon flew back out accompanied by a confused look of “should i put these in my mouth Mumma?”.

Well, I’m not sure. To be fair she did try a further two buttons, one of which was swallowed. They’ve since sat on her snack tray only to be played with as you would counters, in and out of her snack bowls they’ve gone but not once have they ventured back to our mouths. Fussy Mr Hubbypants was unavailable for comment but doesn’t like white chocolate anyway. Maybe that would have been in his favour.

These also come in a brown chocolate variety but I can’t say I’m inspired to try them. The package states “I love them on Mum’s cakes” but I have no more desire to put these on a cake than I have the urge to put plastic in a stew.

Rest assured that like cockroaches and cheap gluten-free bread Sweet William Dairy Free White Buttons will be around after a nuclear attack, but that’s not a consideration I wish to make on a casual basis whilst popping in Tesco.

Overall I give 1/5 for these. Nice try but not for us.

Pros: Price reasonable (40p in Tesco). Free from most things. One for the fallout shelter.

Maybe we had a bad bag.

Things I Write About

There was an error retrieving images from Instagram. An attempt will be remade in a few minutes.

Follow Thank You For The Moosick: Dairy Free Reviews on WordPress.com